Electricity flows along a circuit that consists of a power source, a load, and conductors. The human body can become a conductor and a part of the electric circuit which can result in electrical shock. Exposure to electrical energy may result in no injury at all or may result in physical and/or neurological damage or death. An minor electrical shock may cause muscle pain and may trigger mild muscle contractions or startle people, causing a fall. However, high resistance contact may cause dielectric breakdown at the skin, lowering skin resistance, causing surface damage, but more often tissues deeper underneath the skin have been severely damaged. Electric shocks can paralyze the respiratory system or disrupt heart action, causing instant death.

The outcome of an electrical shock depends on several factors that are determined by the relationship between current, voltage, and resistance, also known as Ohm’s Law.

Exposure Conditions play an important role in the extent of injuries sustained as a result of electric shock. These factors include:

Example:
A worker is using a faulty 120 volt tool on a hot and humid day and is sweating heavily. The worker’s body resistance is approximately 1,000 ohms.
Using Ohm’s law:
• Current = 120 volts / 1,000 ohms.
• Current = 0.12 amps or 120 mA.
According to the above table, this amount of current will cause a painful shock, the workers’s breathing may stop, there will be severe muscle contractions, and death is possible.

Arc-Flash-Arc- Flash burn can occur when an electrical equipment malfunction causes an extremely high temperature area around the arc that can reach as high as 35,000 degrees Fahrenheit. Electrical burn can also occur any time an electrical current flows through bone or tissue.

Arc-Blast- When an arc occurs, a blast causes molten metal to be thrown through the air and onto the skin or into the eyes. The speed of the molten metal in an arc-blast is estimated at approximately 700 mph. 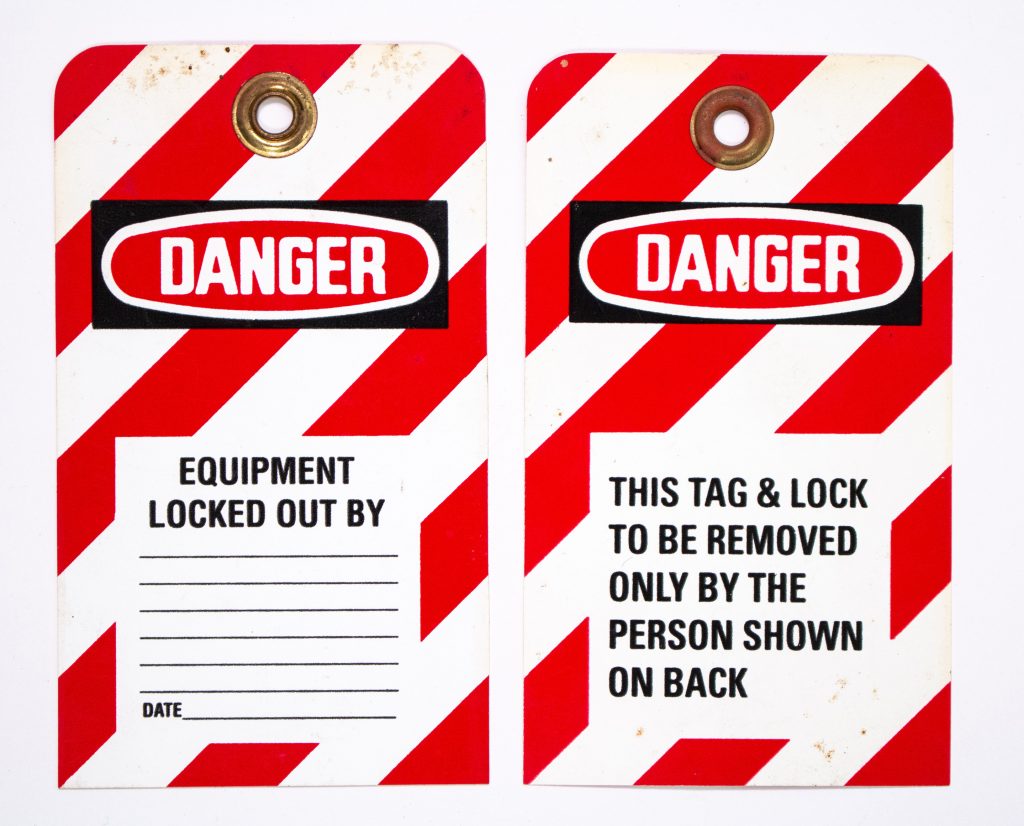 Lock Out & Tag Out Code Book by Gwen Arkin is licensed under CC BY 4.0

Lockout-tagout is a safety procedure used in industry settings to ensure that dangerous machines and circuitry are properly shut off and not started up again prior to the completion of maintenance or service work. It requires that hazardous power sources be “isolated and rendered inoperative” before any repair procedure is started. “Lock and tag” works in conjunction with a lock securing the device or the power source with the hasp, and placing it in such a position that no hazardous power sources can be turned on. The procedure requires that a tag be affixed to the locked device indicating that it should not be turned on.

When two or more subcontractors are working on different parts of a larger overall system, the locked-out device is first secured with a folding scissor-like clamp that has many padlock holes to hold it closed. Each subcontractor secures their own padlock to the clamp. The locked-out device cannot be activated until all workers have signed off on their portion of the project and removed their padlock from the clamp. A lock selected by color, shape or size (e.g. red padlock) is used to designate a standard safety device, locking and securing hazardous energy. No two keys or locks should ever be the same. A person’s lock and tag must not be removed by anyone other than the individual who installed the lock and tag unless removal is accomplished under the direction of the employer.

Never test an energized circuit when individual components of the circuit can normally be tested by other means. Most electrical components and pathways of electrical systems can be individually tested for continuity and resistance.

Insulated tools are designed for safety and are rated for live use up to 1000 VAC or 1500 VDC. They must be tested at 10 times that value (more than 10,000 V). Insulated tools should be used and stored differently from conventional, non-insulated tools. When being used, they should be kept isolated from other tools, including other insulated tools, to prevent them from getting scraped or nicked. They should be inspected prior to each use and discarded or tested by a reliable authority if damage is suspected.