Receptacles and switches are known as devices. A device is defined as a unit of an electrical system intended to carry, but not use, electric energy. Components that distribute or control energy, but do not consume electricity include:

Always de-energize the electrical circuit first before servicing or installing any of the following devices.

Receptacles are contact devices installed at the outlet for the connection of an attachment plug. While many people (including electricians) refer to a receptacle as an “outlet”, “socket”, or “plug,” they are the wrong terms to use. 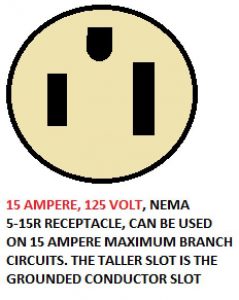 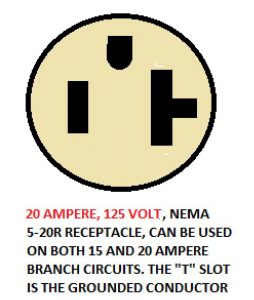 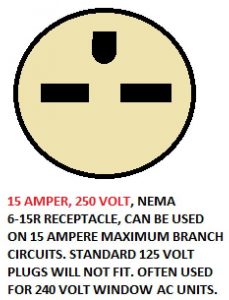 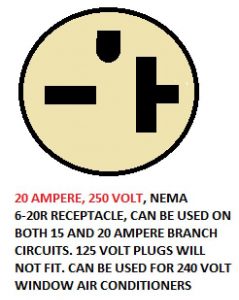 The listing instructions for devices like receptacles and switches normally allow only one wire to be terminated to each terminal screw. However, many electrical boxes containing receptacles or switches could have many circuit conductors requiring connections to the device terminal screws. The best way to make the necessary connections so that only one conductor gets connected to a terminal screw is to use a pigtail.

Once the particular receptacle you are installing is connected to the electrical system, secure it to the device box. Make sure the conductors inside the box are pushed to the back of the device box, leaving enough room to install the receptacle.

Duplex Receptacles (3 Wires):  The most common type of receptacle used in residential wiring is a duplex receptacle rated for 15 amperes at 125 volts. It consists of two single receptacles on the same mounting strap. As many of these devices are installed close to ground level, Tamper-Resistant (T-R) receptacles are required in some locations to protect children. 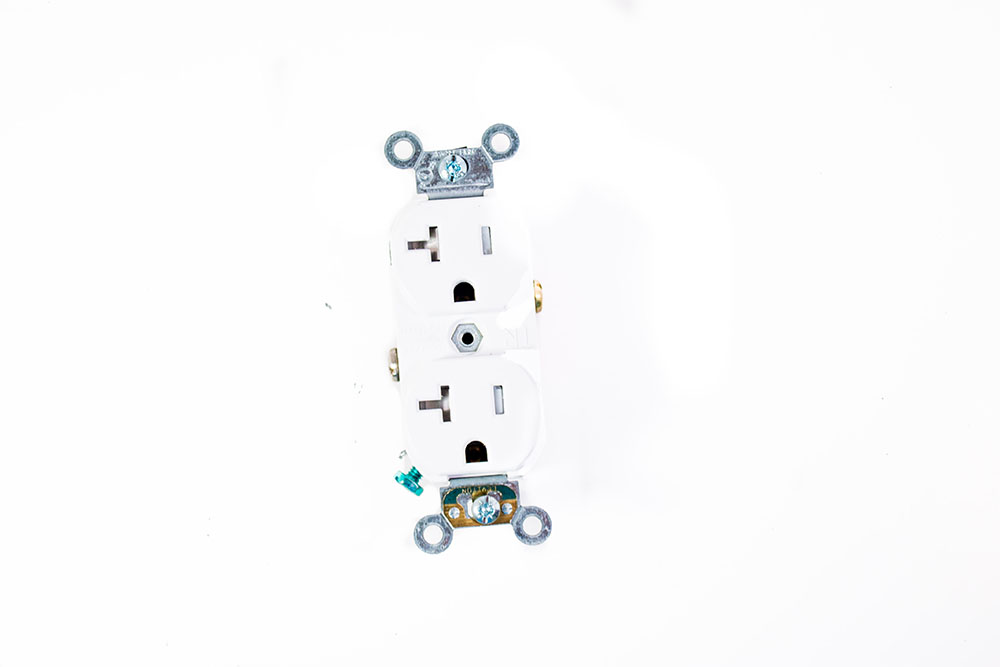 20 Amp Duplex by Bernard Sula is licensed under CC BY 4.0

Split-Wired Duplex Receptacle- A split-wired duplex receptacle usually has a switch controlling half of the receptacle and the other half is hot all the time. They are often used to provide an accessible switching device near a doorway that controls a plug-in table lamp across the room (ex: bedside table- split-wire receptacle allows the light to be turned on and off by the doorway, but the alarm clock plugged into the same duplex receptacle remains on at all times). Before installing, remove the tab connecting the terminal screws on the hot side of the receptacle. Do not remove the tab connecting the silver terminal screws. 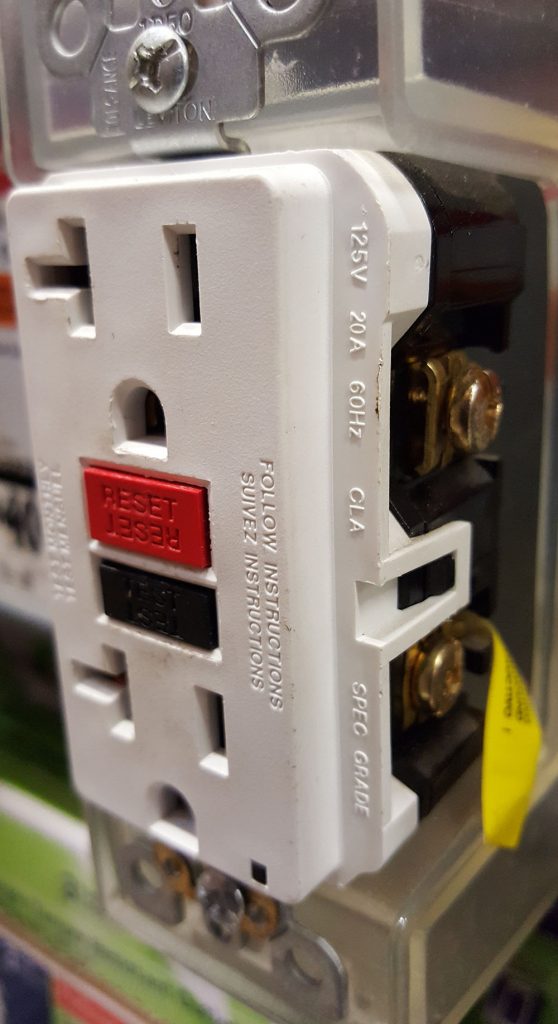 GFCI Receptacle by Clifford Rutherford is licensed under CC BY 4.0

Two appliances typically require a special 125/250 volt receptacle installation. These receptacles are larger and have different configurations than the single or duplex receptacles. 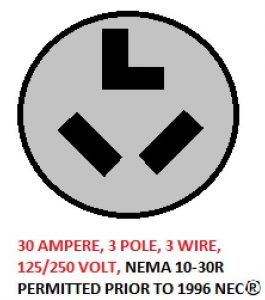 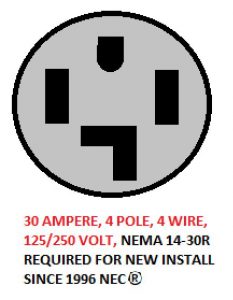 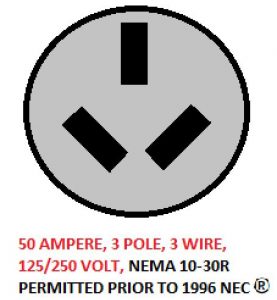 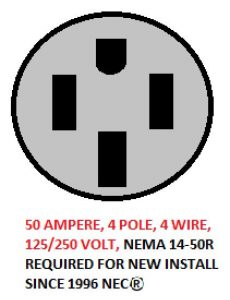 Switches are used to control the various lighting accessories, and sometimes receptacles or equipment, installed in residential wiring. The procedures for installing a switch are very similar to receptacle installation procedures. The main difference is the number of switches installed in multi-gang boxes: In residential installations, two- and three-gang switch boxes are common. Take care to ensure there is enough room in the device box for all conductors and switches.

There are two styles of switches commonly used residential and commercial construction: toggle and rocker (also known as decor). While rocker switches are also considered decorative and may be more desirable in some cases, they often have a wider profile than toggle switches and may require more space in the switch box. Because there are so many multi-gang switch boxes, make sure all the switches are level so the faceplate will be level when it is installed.

Switch rating must be matched to the voltage and current you encounter with the circuit on which you are using the switch. Many residential lighting circuits are wired with 14 AWG conductors protected with a 15-amp circuit breaker and will require switches with a 15 amp, 120 volt rating. This switch rating is the most common found in residential wiring.

Single-pole, three-way, and four-way switches are to be wired so that all switching is done in the ungrounded circuit conductor. There is no need to connect a white insulated grounded conductor to any switch in a residential switching circuit.

Single Pole Switch-  The single-pole switch used in 120- volt circuits to control a lighting outlet or outlets from only one location is the most common. On a single-pole switch, two wires will be connected to the two terminal screws on the switch. Both wires will be considered “hot” ungrounded conductors.One is the incoming power wire and the other wire runs to the light fixture or receptacle. 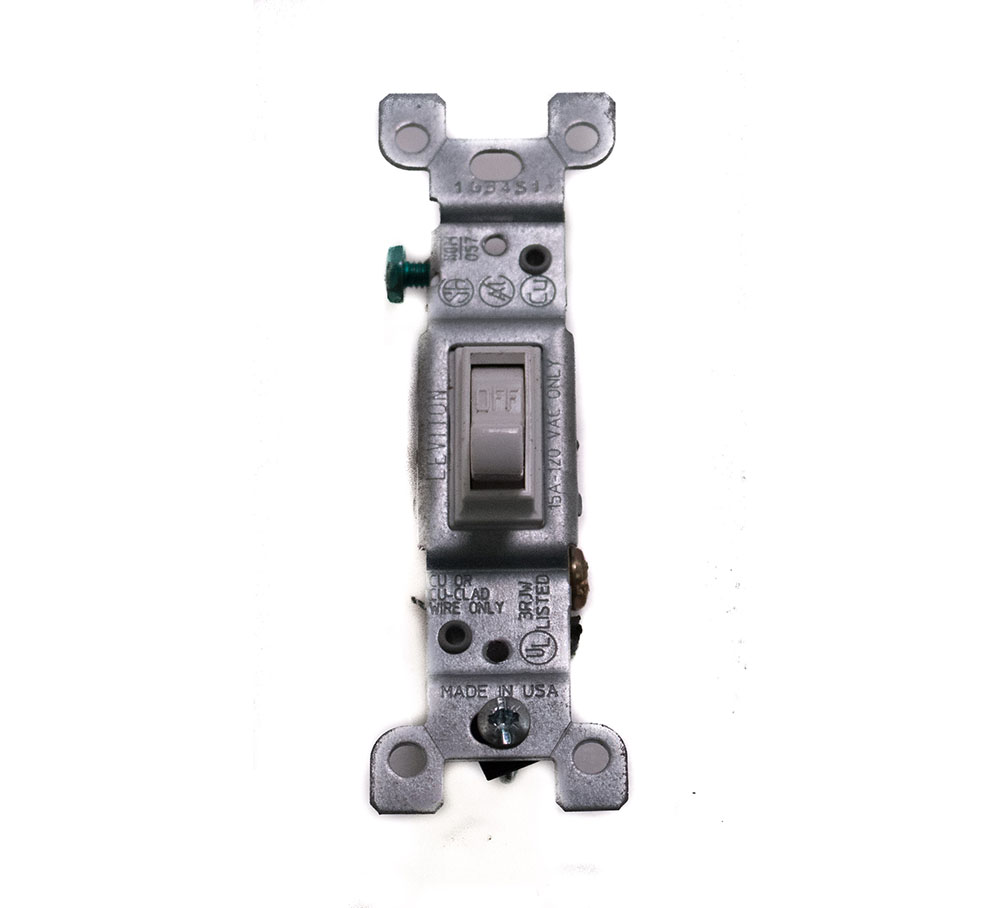 Single Pole Switch by Clifford Rutherford are licensed under CC BY 4.0

*Switch Loop
It is very common for residential electricians to run the power source to the lighting outlet first and then to run a two-wire cable to the single-pole switching location. When employing a switch loop, use the white wire as an ungrounded conductor and identify it as such. It is required that the white conductor be identified at both ends as a hot conductor. Use black electrical tape, although another color tape (like red or blue) may also be used, or a permanent marker to mark the conductor. The mark must completely encircle the conductor.

Three-Way Switch- Connects three conductors to the switch to control a light fixture or receptacle from two locations, such as at the top and bottom of a stairway. Three and four-way switches do not have On/Off markings on them. Beginning electricians and maintenance technicians often find the connections for three-way switches confusing. Learning some basic rules can make the process much easier.

Double-Pole Switch- These switches are used on 240-volt circuits to control a load from one location (ex: electric water heater). The double-pole switch has four terminals on it and, at first glance, looks like a four-way switch. Unlike a four-way (or three-way) switch, the toggle on the double-pole switch does have the words “ON” and “OFF” written on it. This means that like a single-pole switch, there is a correct mounting position for the switch so when it is “ON”, the toggle will indicate it. The double-pole switch also has markings that usually indicate the “load” and the “line” sides of the switch. Usually the “line” set of terminals is colored black and the “load” set of terminals is colored a brass or bronze.

Dimmer Switches- are used to brighten or dim a lighting fixture’s lamps. Found in both a singlepole and a three-way configurations, both are available with either a rotating knob style or sliding
switch that varies the resistance in the circuit. Dimmer switches differ from regular switches in that they do not have terminal screws, but instead have colored insulated pigtail wires coming off the switch installed by the manufacturer. To install a dimmer switch, connect the dimmer switch pigtails to the appropriate circuit conductor with a wirenut. Single-pole or three-way dimmer switches are connected in a switching circuits exactly as regular single pole and three-way switches.

Slide Dimmer & Rotary Dimmer by Clifford and Rosemary Rutherford are licensed under CC BY 4.0 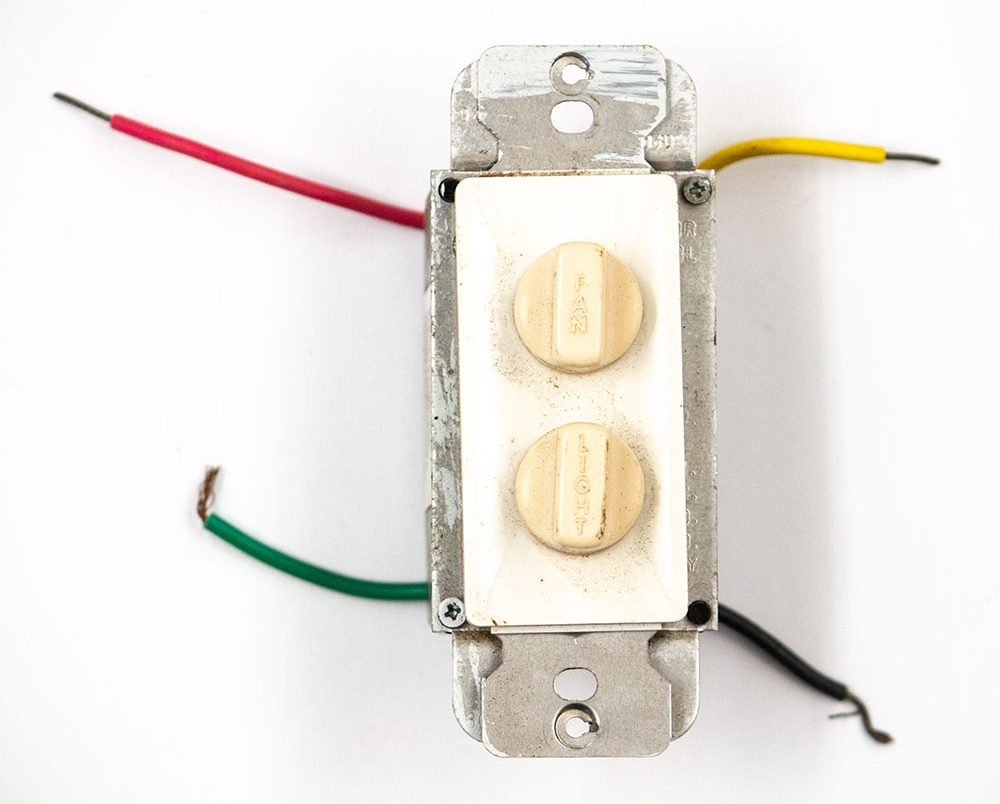 Combination Switch by Gwen Arkin are licensed under CC BY 4.0