Of course we can add, subtract, multiply, and divide decimal numbers by rewriting them as fractions and using the algorithms we know there. Of course, sometimes it is a lot more work to convert to fractions than it is to just work directly with the decimals (as long as you know what you’re doing).  So let’s think about place value and computing with decimals.

Remember that when we used the “Dots & Boxes” model to add, it looked like this. 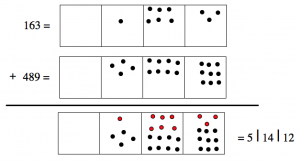 We then perform explosions until there are fewer than ten dots in each box, and we find that:

Subtraction was a little more complicated.

We start with the representation of 921:

Since we want to “take away” 551, that means we take away five dots from the hundreds box, leaving four dots.

Now we want to take away five dots from the tens box, but we can’t do it! There are only two dots there. What can we do? Well, we still have some hundreds, so we can “unexplode” a hundreds dot, and put ten dots in the tens box instead. Then we’ll be able to take five of them away, leaving seven.

(Notice that we also have one less dot in the hundreds box; there’s only three dots there now.)

Now we want to take one dot from the ones box, and that leaves no dots there.

Multiplying and Dividing: Powers of 10

Let’s quickly review the “Dots & Boxes” model for multiplication of whole numbers before we get back to talking about decimals.

If we want to compute

, it helps to remember what multiplication means.  One interpretation is: I want to add

to itself a total of four times.  So there will be:

Here’s the start of the computation:

To finish the computation, we  need to do some explosions to write the result as a familiar base 10 number:

You know that multiplying a base-ten whole number by 10 results in appending a zero to the right end of the number.  Your work above should convince you that this does not work for decimals!

If I multiply a whole number or a decimal by 10, a simple way to find the result is

Fill in the box with a whole number or decimal so that the product is:

Be sure to justify your answers.  You should use your number sense rather than computing by hand or with a calculator!

One way to multiply decimal numbers by converting them to fractions and then using what you know about multiplying fractions.  There are other ways to think about multiplying that focus on number sense and place value rather than on the mechanics of computation.

Suppose a student wanted to compute

, but he didn’t already know the standard algorithm.  What might she do?  Here is one idea:

.  Since I want to multiply by

, my answer should be

You should notice that the student is using the associative property of multiplication:

(Don’t use a calculator, don’t work out the multiplication by hand, and don’t use the trick of “counting the number of decimal places.” Use your number sense!)

The standard algorithm for multiplying decimal numbers can be described this way:

Compute the product as if the two factors were whole numbers.  (Ignore the decimal points.)

Count the number of digits to the right of the decimal point in each factor, and add those numbers together.  Call the result

As you might expect, dividing decimals is more complicated to explain than any of the other operations. It’s hard to adapt our “Dots & Boxes” model for division.  Suppose we want to compute

.  We can certainly draw the picture for

, but how could we make groups of

Let’s start by sharing what you already know. Perform this computation (by hand, not with a calculator), showing all of your work. Explain your method to a partner, and see if your partner computed the same way.

The standard algorithm for dividing numbers represented by finite decimal expansions is something like this:

Move the decimal point of the divisor to the end of the number.

Move the decimal point of the dividend the same number of positions (the same distance and direction).

Divide the new decimal dividend (from Step 2) by the new whole number divisor (from Step 1).  Since we’re dividing by a whole number, our standard methods make sense.

This is a pretty mechanical description, and doesn’t give a lot of insight into why this algorithm works.

Write down at least two examples of computing with the algorithm described above.  (Make up your own numbers to test.  Be sure to show every step clearly.)  You can do the division by drawing a “Dots & Boxes” picture or by another method (but don’t use a calculator).  Then answer these more general questions.

Carefully explain why the algorithm described above in three steps works for computing division of decimal numbers.  You need to explain what is going on when you “move the decimal point” in Steps 1 and 2, and why the result you compute in Step 3 is the same as the original problem.