Why is it so difficult for some people to lose weight and for others to gain weight? One theory is that every person has a “set point” of energy balance. This set point can also be called a fat-stat or lipostat, meaning the brain senses body fatness and triggers changes in energy intake or expenditure to maintain body fatness within a target range. Some believe that this theory provides an explanation as to why after dieting, most people return to their original weight not long after stopping the diet. Another theory is referred to as the “settling” point system, which takes into account (more so than the “set-point” theory) the contribution of the obesogenic environment to weight gain. In this model, the reservoir of body fatness responds to energy intake or energy expenditure, such that if a person is exposed to a greater amount of food, body fatness increases, or if a person watches more television body fatness increases. A major problem with these theories is that they overgeneralize and do not take into account that not all individuals respond in the same way to changes in food intake or energy expenditure. This brings up the importance of the interactions of genes and the environment.

Not all individuals who take a weight-loss drug lose weight and not all people who smoke are thin. An explanation for these discrepancies is that each individual’s genes respond differently to a specific environment. Alternatively, environmental factors can influence a person’s gene profile, which is exemplified by the effects of the prenatal environment on body weight and fatness and disease incidence later in life.[1]

One example is a study of the offspring of women who were overweight during pregnancy had a greater propensity for being overweight and for developing Type 2 diabetes. Thus, undernutrition and overnutrition during pregnancy influence body weight and disease risk for offspring later in life. They do so by adapting energy metabolism to the early nutrient and hormonal environment in the womb.

Sedentary behavior is defined as the participation in the pursuits in which energy expenditure is no more than one-and-one-half times the amount of energy expended while at rest and include sitting, reclining, or lying down while awake. Of course, the sedentary lifestyle of many North Americans contributes to their average energy expenditure in daily life. Simply put, the more you sit, the less energy you expend. A study published in a 2008 issue of the American Journal of Epidemiology reports that 55 percent of Americans spend 7.7 hours in sedentary behavior daily.[2]

Fortunately, including only a small amount of low-level physical activity benefits weight control. A study published in the June 2001 issue of the International Journal of Behavioral Nutrition and Physical Activity reports that even breaking up sitting-time with frequent but brief increased energy expenditure activities, such as walking for five minutes every hour, helps maintain weight and even aids in weight loss.[3]

Americans partake in an excessive amount of screen time, which is a sedentary behavior that not only reduces energy expenditure, but also contributes to weight gain because of the exposure to aggressive advertising campaigns for unhealthy foods.

In the United States, many societal factors influence the number of calories burned in a day. Escalators, moving walkways, and elevators (not to mention cars!) are common modes of transportation that reduce average daily energy expenditure. Office work, high-stress jobs, and occupations requiring extended working hours are all societal pressures that reduce the time allotted for exercise of large populations of Americans. Even the remote controls that many have for various electronic devices in their homes contribute to the US society being less active. More obesogenic factors were discussed in the weight management section of this chapter.

Socioeconomic status has been found to be inversely proportional to weight gain. One reason for this relationship is that inhabitants of low-income neighborhoods have reduced access to safe streets and parks for walking. Another is that fitness clubs are expensive and few are found in lower-income neighborhoods. The recent and long-lasting economic crisis in this country is predicted to have profound effects on the average body weight of Americans. The number of homeless in this country is rising with many children and adults living in hotels and cars. As you can imagine neither of these “home spaces” has a kitchen, making it impossible to cook nutritious meals and resulting in increased economically-forced access to cheap, unhealthy foods, such as that at a nearby gas station.

Too Little or Too Much Weight: What Are the Health Risks?

The increase in China’s waistline is partly attributed to changes in the traditional diet, more sedentary lives, and a massive increase in motor vehicle use. Moreover, China’s recent famines in the 1950s, which affected the poor and lower classes to a greater extent than the upper class, have sanctioned lax social attitudes toward body fat and reinspired the age-old Chinese belief that excess body fat represents health and prosperity.

The associated diseases of overweight and obesity happen over many years, and signs and symptoms commonly take decades to manifest. With China’s younger population and other developed countries experiencing a dramatic weight increase, the associated chronic diseases will come about much earlier in life than in previous generations. This will put an even greater burden on society.

Health Risks of Being Overweight and Being Obese

State Map of the Prevalence of Obesity in America 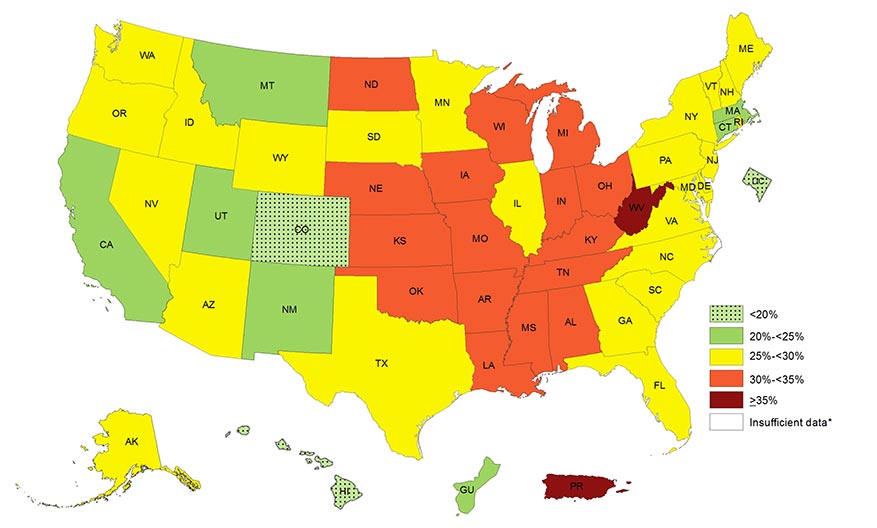 Visit https://www.cdc.gov/obesity/data/prevalence-maps.html to see the prevalence of self-reported obesity among U.S. adults from 2014-2016.

As BMIs increase over 25, the risks increase for heart disease, Type 2 diabetes, hypertension, endometrial cancer, postmenopausal breast cancer, colon cancer, stroke, osteoarthritis, liver disease, gallbladder disorders, and hormonal disorders. The WHO reports that overweight and obesity are the fifth leading cause for deaths globally, and estimates that more than 2.8 million adults die annually as a result of being overweight or obese.[7] Moreover, overweight and obesity contribute to 44 percent of the Type 2 diabetes burden, 23 percent of the heart disease burden, and between 7 and 41 percent of the burden of certain cancers.[8]

Similar to other public health organizations, the WHO states the main causes of the obesity epidemic worldwide are the increased intake of energy-dense food and decreased level of physical activity that is mainly associated with modernization, industrialization, and urbanization. The environmental changes that contribute to the dietary and physical activity patterns of the world today are associated with the lack of policies that address the obesity epidemic in the food and health industry, urban planning, agriculture, and education sectors.

Factors Affecting Energy Expenditure by University of Hawai‘i at Mānoa Food Science and Human Nutrition Program is licensed under a Creative Commons Attribution-NonCommercial-ShareAlike 4.0 International License, except where otherwise noted.