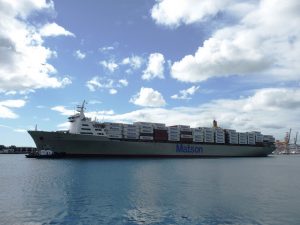 Matson has a near-monopoly on shipping goods to the islands: they control 67% of the West Coast to Hawaiʻi shipping trade. Horizon controls 29%. This means that 96% of the market is controlled by just two firms. When it was announced in 2017 that Matson might start facing competition, the share price of Matson fell dramatically and Matson lost $300 million of value in a couple of days!
How do monopoly firms behave in the marketplace? Do they have “power?” Does this power potentially have unintended consequences? Why do firms with monopolies make such large profits compared to firms that face competition? That is the topic of this chapter.

Introduction to a Monopoly

In this chapter, you will learn about:

There is a widespread belief that top executives at firms are the strongest supporters of market competition, but this belief is far from the truth. Think about it this way: If you very much wanted to win an Olympic gold medal, would you rather be far better than everyone else, or locked in competition with many athletes just as good as you are? Similarly, if you would like to attain a very high level of profits, would you rather manage a business with little or no competition, or struggle against many tough competitors who are trying to sell to your customers? By now, you might have read the chapter on Perfect Competition. In this chapter, we explore the opposite extreme: monopoly.

If perfect competition is a market where firms have no market power and they simply respond to the market price, monopoly is a market with no competition at all, and firms have complete market power. In the case of monopoly, one firm produces all of the output in a market. Since a monopoly faces no significant competition, it can charge any price it wishes. While a monopoly, by definition, refers to a single firm, in practice the term is often used to describe a market in which one firm merely has a very high market share. This tends to be the definition that the U.S. Department of Justice uses.

Even though there are very few true monopolies in existence, we do deal with some of those few every day, often without realizing it: The U.S. Postal Service, your electric and garbage collection companies are a few examples. Some new drugs are produced by only one pharmaceutical firm—and no close substitutes for that drug may exist.

From the mid-1990s until 2004, the U.S. Department of Justice prosecuted the Microsoft Corporation for including Internet Explorer as the default web browser with its operating system. The Justice Department’s argument was that, since Microsoft possessed an extremely high market share in the industry for operating systems, the inclusion of a free web browser constituted unfair competition to other browsers, such as Netscape Navigator. Since nearly everyone was using Windows, including Internet Explorer eliminated the incentive for consumers to explore other browsers and made it impossible for competitors to gain a foothold in the market. In 2013, the Windows system ran on more than 90% of the most commonly sold personal computers. In 2015, a U.S. federal court tossed out antitrust charges that Google had an agreement with mobile device makers to set Google as the default search engine.

This chapter begins by describing how monopolies are protected from competition, including laws that prohibit competition, technological advantages, and certain configurations of demand and supply. It then discusses how a monopoly will choose its profit-maximizing quantity to produce and what price to charge. While a monopoly must be concerned about whether consumers will purchase its products or spend their money on something altogether different, the monopolist need not worry about the actions of other competing firms producing its products. As a result, a monopoly is not a price taker like a perfectly competitive firm, but instead exercises some power to choose its market price.

Principles of Microeconomics - Hawaii Edition by John Lynham is licensed under a Creative Commons Attribution 4.0 International License, except where otherwise noted.