The following is from http://pvs.kcc.hawaii.edu/ike/hookele/modern_wayfinding.html.

Design a course strategy, which includes a reference course for reaching the vicinity of one’s destination, hopefully upwind, so that the canoe can sail downwind to the destination rather than having to tack into the wind to get there. (Tacking involves sailing back and forth as closely as possible into the wind to make progress against the wind; its very arduous and time-consuming, something to be avoided if at all possible, particularly at the end of a long, difficult voyage.)

Finding land after entering the vicinity of the destination, called a target screen or ‘the box’.

So how is the navigation done — especially component (2) — through thousands of miles of open ocean? You can’t see land. How can you hold closely to the reference course? How can you keep track of distance and direction traveled? How can you even know if you’re going in the right direction if all you can see is blue ocean and blue sky?

By day, the navigators use their deep knowledge of the oceans. Which way do the winds blow? Which way do the prevailing currents move? Clouds in the sky, flotsam in the water, and animal behaviors give them great insight into where land might be, and where they are in relation to it.

By night, they use the stars. In this section, you’ll learn just a tiny fraction of what these master navigators know about the stars.

Here is a time-lapse picture[1] of the stars in the night sky: 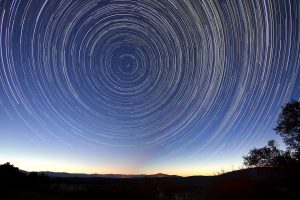 A fundamental tool for navigators on Hōkūle`a and other voyaging canoes is a star compass. Here’s a picture of Mau Piailug[2] and a star compass[3] he used in his teaching.

The object in the center of the circle represents the canoe. The shells along the outside represent directional points. The idea is to imagine the stars rising up from the horizon in the east, traveling through the night sky, and setting past the horizon in the west. They move like they’re on a sphere surrounding the Earth (it’s called the celestial sphere).

Nainoa Thompson developed a star compass with 32 equidistant points around a circle. (Note this is different than the points in Mau’s star compass pictured above.) You will first try to make a rough sketch of Nainoa’s star compass based on this information.

Haka: “empty,” describing the skies in this house.

Nā Leo: “the voices” of the stars speaking to the navigator.

Manu: “bird,” the Polynesian metaphor for a canoe.

Noio: the Hawaiian tern (a bird).

Lā: “sun,” which stays in this house most of the year.

How is the star compass used in navigation? There are lots of ways. Here’s a (very!) quick overview:

A navigator memorizes the houses of over 200 stars. At sunrise and sunset (when the sun or the stars are rising), the navigator can use the star compass to memorize which way the wind is moving and which way the currents are moving. The navigator can then use that information throughout the day or night to ensure the canoe stays on course.

Look again at the time-lapse picture of the stars:

When teaching navigation while sitting on land, it’s perfectly fine to have a rough sketch or model of the star compass. But if you really have to do the navigation, you need to make a very, very precise star compass.

Imagine Nainoa Thompson, who navigated Hōkūle`a on the final leg of her journey from Hawai`i to Rapa Nui, an island even smaller and lower than Ni`ihau. You have to be within 30 miles of Rapa Nui to see it. But a mistake of even one degree would have led to Hōkūle`a being 60 miles off course. And if you end up drifting in the open ocean and supplies run out? Well…

Now that you have a rough sketch of the star compass and know what it should look like, your job is to draw one that’s as perfect as possible. That means you want to draw:

Of course, a star compass on a piece of paper isn’t so useful when you’re out on a canoe. How do you position it properly? And how do you keep it from getting lost, damaged, or soaking wet? You paint it on the rails of the canoe, permanently!

Look back at the drawing of Hōkūle`a. Find the “kilo” (navigator’s seat) in the rear (aft) of the canoe. There is actually one navigator’s seat on either side of the deck.

Go back to the scale drawing of Hōkūle`a that you made in Problem 1. Add the navigator’s seats to your drawing. You will then add the star compass to the rails as follows:

Initially, I depended on geometry and analytic mathematics to help me in my quest to navigate the ancient way. However as my ocean time and my time with Mau have grown, I have internalized this knowledge. I rely less on mathematics and come closer and closer to navigating the way the ancients did.

Really he is still doing a lot of mathematics; it’s just mathematics that he has internalized and that is now second nature to him. The ancient navigators may not have spoken of their navigation techniques in the same modern language we’ve been using — compass points and perfect circles and degrees. But their mathematical understanding was truly astonishing.