Yesterday was Zoe’s birthday, and she had a big rectangular cake. Today,

of the cake is left. The leftover cake is shown here.

Draw a picture of the original (whole) cake and explain your work.

Use benchmarks and intuitive methods to arrange the fractions below in ascending order. Explain how you decided. (The point of this problem is to think more and compute less!):

Which of these fractions has the larger value? Justify your choice.

Solve each division problem. Look for a shortcut, and explain your work.

because she cancels the sixes:

Jimmy says that a fraction does not change in value if you add the same amount to the numerator and the denominator. Is he right? If you were Jimmy’s teacher, how would you respond?

Jill, her brother, and another partner own a pizza restaurant. If Jill owns

of the restaurant and her brother owns

of the restaurant, what fraction does the third partner own?

Nana was planning to make a red, white, and blue quilt. One-third was to be red and two-fifths was to be white. If the area of the quilt was to be 30 square feet, how many square feet would be blue?[1]

Rafael ate one-fourth of a pizza and Rocco ate one-third of it. What fraction of the pizza did they eat?

Problem 18 (Tangrams). Tangrams[2] are a seven-piece puzzle, and the seven pieces can be assembled into a big square.

of the small pizza and

of the large pizza. So she said that she ate

of a pizza. Do you agree with Mikiko’s calculation? Did she eat

of a whole pizza? Carefully justify your answer. (This question is tricky. It’s probably a good idea to draw a picture!)

Look at the triangle of numbers. There are lots of patterns here! Find as many as you can. In particular, try to answer these questions: 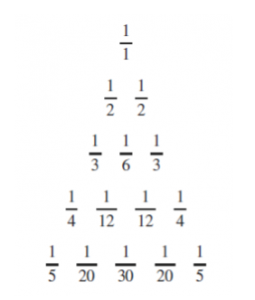 Marie made a sheet cake at home, but she saved some to bring to work and share with her co-workers the next day. Answer these questions about Marie’s cake. (Draw a picture!)

An elementary school held a “Family Math Night” event, and 405 students showed up. Two-thirds of the students who showed up won a door prize. How many students won prizes?

For each picture shown: 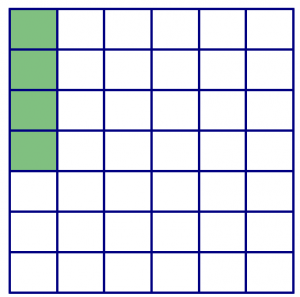 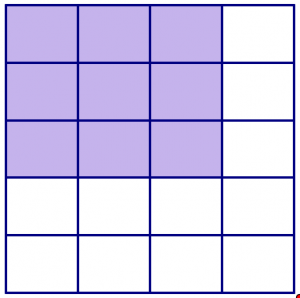 can be a different value in each of the three problems. Justify your answer: How do you know it is the closest to 1?

A town plans to build a community garden that will cover

of a square mile on an old farm. One side of the garden area will be along an existing fence that is

of a mile long. If the garden is a rectangle, how long is the other side?

pounds of seed to plant

acres of wheat. How many pounds of seed did he use per acre?

cup per load. How many loads of laundry can your family do with one box of detergent?

full, then the scale balances. How much does the full container of flour weigh? 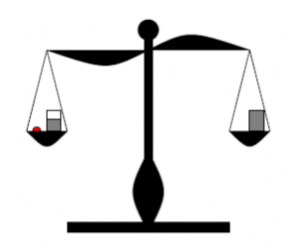 of his allowance on a movie. He spent

of what was left on snacks at school. He also spent $3 on a magazine, and that left him with

of his total allowance, which he put into his savings account. How much money did Geoff save that week?

Lily was flying to San Francisco from Honolulu. Halfway there, she fell asleep. When she woke up, the distance remaining was half the distance traveled while she slept. For what fraction of the trip was Lily asleep?