.” They imagine lots of equations with varying levels of complexity, but the goal is always the same: find the unknown quantity.  This is a procedural view of algebra.

Even elementary students can be exposed to ideas in procedural algebra. This happens any time they think about unknown quantities and try to solve for them.  For example, when first grade students learn to add and subtract numbers “within 10,’” they should frequently tackle problems like these:

Although procedural algebra is important, it’s not the most important skill, and it’s certainly not the whole story.

You also need to foster thinking about structural algebra in your students: using symbols to express meaning in a situation. If there is an x on your page, you should be able to answer, “what does the x mean? What does it represent?”

Most of what you’ve done so far in this chapter is structural algebra. You’ve used letters and symbols not to represent a single unknown quantity, but a varying quantity. For example, in Section 4 you used letters to represent the “figure number’” or “case number” in a growing pattern. The letters could take on different values, and the expressions gave you information: how many tiles or toothpicks or stars you needed to build that particular figure in that particular pattern.

Krystal was looking at this pattern, which may be familiar to you from the Problem Bank: 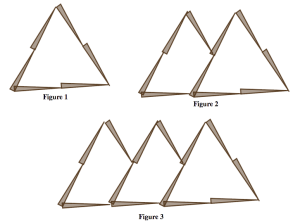 She wrote down the equation

In Krystal’s equation, what does

represent? How do you know?

Candice was thinking about this problem:

She wrote down the equation

. In Candice’s equation, what does

represent? How do you know?

stands for the number of coins Sarah has in her collection, and

stands for the number of coins David has in his collection. What would each of these equations say about their coin collections?

The pictures below show balance scales containing bags and blocks. The bags are marked with a “?”’ because they contain some unknown number of blocks. In each picture:

For each picture, determine how many blocks are in each bag. Justify your answers. 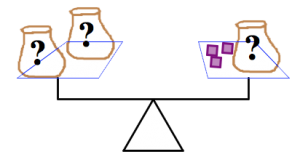 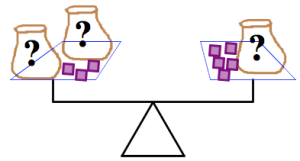 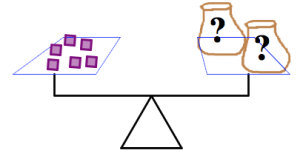 When he was working on Problem 24, Kyle wrote down these three equations.

Match each equation to a picture, and justify your choices. Then solve the equations, and say (in a sentence) what the solution represents.

Now solve the balance puzzle. Where is the “

” in your puzzle?  What does it represent?

Which equation below is most like the one in Problem 27 above?  Justify your choice.

Which equation below is most like the one in Problem 29 above?  Justify your choice.

Create a balance puzzle where the solution is not a whole number of blocks. Can you solve it? Explain your answer.

There are three piles of rocks: pile A, pile B, and pile C. Pile B has two more rocks than pile A. Pile C has four times as many rocks as pile A. The total number of rocks in all three piles is 14.

You have seen that in algebra, letters and symbols  can have different meanings depending on the context.

In much the same way, equations can represent different things.

Give an example of each type of equation.  Be sure to say what the symbols in the equations represent.

Answer the following questions about the equation