is the answer to a division problem:

represents the amount of pie an individual child receives when

pies are shared equally by

For example, as the picture shows,

both give two pies for each child. 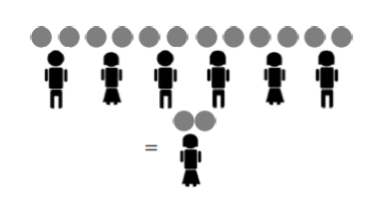 This leads us to want to believe:

(at least for positive whole numbers

We say that the fractions

yields the same result as

Write down a lot of equivalent fractions for

is the same problem as:

Most people say we have cancelled or taken a common factor 4 from the numerator and denominator.

Mathematicians call this process reducing the fraction to lowest terms. (We have made the numerator and denominator smaller, in fact as small as we can make them!)

Teachers tend to say that we are simplifying the fraction. (You have to admit that

does look simpler than

Example: How Low Can You Go?

can certainly be simplified by noticing that there is a common factor of 10 in both the numerator and the denominator:

Since 4 and 5 share no common factors, this is as far as we can go with this example (while staying with whole numbers).

Mix and Match: On the top are some fractions that have not been simplified. On the bottom are the simplified answers, but in random order. Which simplified answer goes with which fraction? (Notice that there are fewer answers than questions!)

Use the “Pies Per Child Model” to explain why the key fraction rule holds. That is, explain why each individual child gets the same amount of pie in these two situations: