So far, we have been thinking about a fraction as the answer to a division problem.  For example,

is the result of sharing two pies among three children. 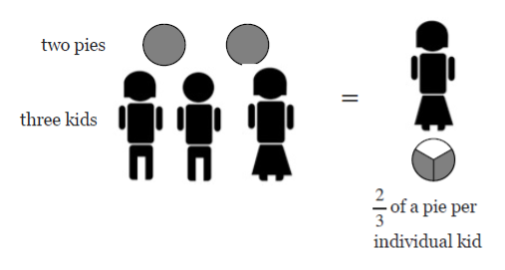 Of course, pies do not have to be round. We can have square pies, or triangular pies or squiggly pies or any shape you please. 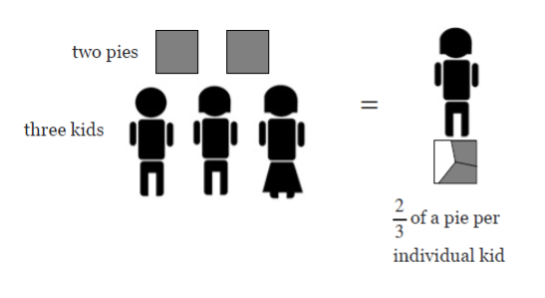 This “Pies Per Child Model” has served us perfectly well in thinking about the meaning of fractions, equivalent fractions, and even adding and subtracting fractions.

However, there is no way to use this model to make sense of multiplying fractions! What would this mean?

So what are fractions, if we are asked to multiply them? We are forced to switch models and think about fractions in a new way.

This switch is fundamentally perturbing. Think about students learning this for the first time. We keep switching concepts and models, and speak of fractions in each case as though all is naturally linked and obvious. None of this is obvious, it is all absolutely confusing. This is just one of the reasons that fractions can be such a difficult concept to teach and to learn in elementary school!

For each of the following visual representations of fractions, there is a corresponding incorrect symbolic expression.

In thinking about fractions, it is important to remember that there are always units attached to a fraction, even if the units are hidden. If you see the number

in a problem, you should ask yourself “half of what?” The answer to that question is your unit, the amount that equals 1.

One thing that can make fraction problems so difficult is that the fractions in the problem may be given in different units (they may be “parts” of different “wholes”).

Example (Everyone is right!)

Mr. Li shows this picture to his class and asks what number is shown by the shaded region.

Mr. Li exclaims, “Everyone is right!”

For each picture below, say what fraction it represents and how you know you are right.

If we think about fractions as “portions of a segment,” then we can talk about their locations on a number line. We can start to treat fractions like numbers. In the back of our minds, we should remember that fractions are always relative to some unit. But on a number line, the unit is clear: it is the distance between 0 and 1.

This measurement model makes it much easier to tackle questions about the relative size of fractions based on where they appear on the number line. We can mark off different fractions as parts of the unit segment. Just as with whole numbers, fractions that appear farther to the right are larger.

You probably came up with benchmarks and intuitive methods to think about the relative sizes of fractions. Here are some of these methods. (Did you come up with others?)

: A fraction is greater than

if the numerator is more than half the denominator. Another way to check (which might be an easier calculation): a fraction is greater than

if twice the numerator is bigger than the denominator.

Why? Well, if we double the fraction and get something bigger than 1, then the original fraction must be bigger than

. The justification for this one is a little trickier: The denominator tells you how many pieces make up one whole. If there are more pieces in a whole (if the denominator is bigger), then the pieces must be smaller. And if you take the same number of pieces (same numerator), then the bigger piece wins.

Numerator = denominator − constant: You can extend the test above to fractions whose numerators are both the same amount less than their denominators. The fractions will again be in the same order as the denominators, for exactly the same reason. For example,

, because both are four “pieces” less than one whole, and the

pieces are smaller than the

Consider the patterns below.

Answer these questions about each of the patterns.

The patterns above are called arithmetic sequences: a sequence of numbers where the difference between consecutive terms is a constant. Here are some other examples:

If you have not done so already, find the common difference between terms for Patterns 1, 2, and 3. Are they really arithmetic sequences?

For each of the sequences above, decide if it is an arithmetic sequence or not. Justify your answers.

so the resulting four numbers are in an arithmetic sequence.

so the resulting four numbers are in an arithmetic sequence.

Exchange your sequences with a partner, but do not tell your partner which is which.

When you get your partner’s sequences: decide which is an arithmetic sequence and which is not. Check if you and your partner agree.